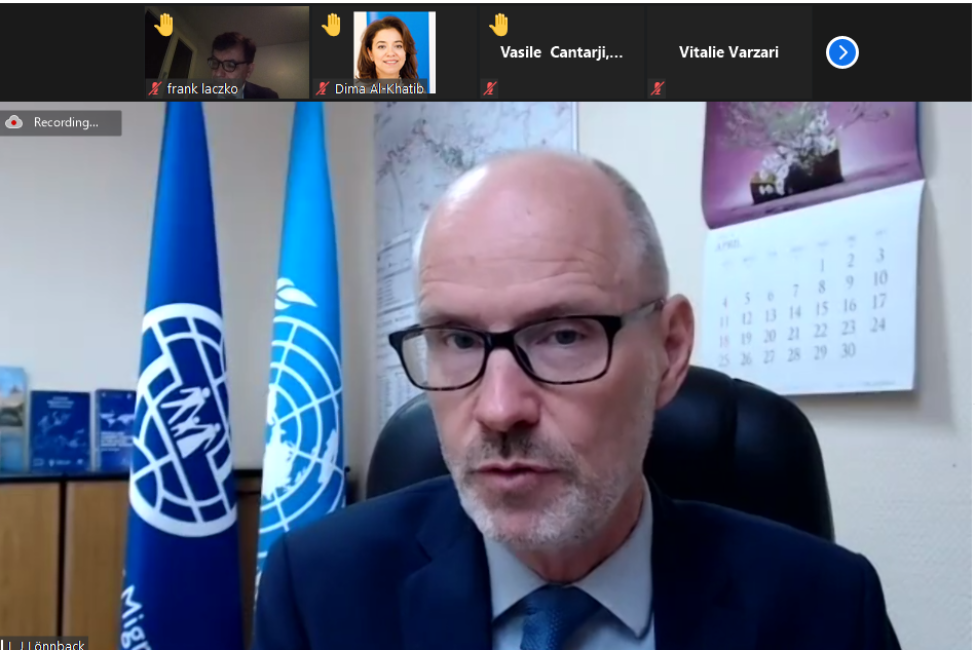 Chisinau - During an online workshop organized on 14 April 2021 and moderated by Mr. Lars Johan Lönnback, the chief of IOM Mission to Moldova, the newly released Migration Data Report produced by the the IOM Global Migration Data Analysis Centre (GMDAC) in Berlin was presented. The report has been prepared by a team of prominent international experts led by Dr. Michel Poulain, presenting the current migration data system in the Republic of Moldova, and put forward a set of recommendations to improve the collection and use of the migration statistics to support the evidence-based policymaking.

Attended by an audience of more than 110 participants – representing Moldovan national stakeholders, UN Agencies’ representatives, Diplomatic Missions to Moldova, World Bank, SDC Moldova, EU Delegation in Moldova, international experts, civil society representatives, and academia – the event represented a good opportunity to understand the current status of Moldovan data system, exchange ideas and formulate proposals on how to make a better use of the migration data.

Mr. Simon Edward Springett, UN RCO in Moldova, opened the event mentioning that the data on population and migration are a crucial pre-requisite for devising and monitoring the implementation of development strategies and many sectorial policies, from health, education, rural development, environment to economic development. In the same context, Mr. Frank Laczko, director of IOM GMDAC, highlighted the global context of the work on Migration Data Profile in six selected countries, including Moldova, mentioning in particular that across the UN system, the data became a priority. GMDAC director underlined that the fact that “UN Secretary General launched in 2020 an explicit UN-wide data strategy, a document that says that all UN agencies should serve their member states by investing more in how we manage and collect data to ensure that we use the data effectively, share it with ministries so that we can inform policymaking and programing across the world”.

Highlighting the complexity of migration processes, Ms. Olga Poalelungi, the director of the Migration and Asylum Bureau, mentioned that “As the holder of administrative data sources in the field of migration, the Ministry of Internal Affairs aims for the future to develop the capacity to collect data in the field of migration by increasing the performance, modernization and development of the Integrated Migration and Asylum Information System (SIIAMA) within the BMA, advancing the Integrated Information System of the State Border of the General Inspectorate of Border Police, strengthening the institutional capacities of these authorities in processing and using data on migration, training staff, disseminating data to interested authorities and academia.” Complementing the above statements, Ms. Aurelia Spataru, the deputy-general director of the National Bureau for Statistics, emphasized that the demand for the statistical data is increasing constantly, a process determined both by the technical progress and by the global and national development agendas, such as the Agenda 2030, the National Development Strategy – Moldova 2030, and the National Strategy in the field of migration and asylum. Therefore, the NBS representative mentioned that more accurate, clearer, more accessible, more disaggregated statistics, as well as integration and reconciliation of the data systems is crucial in the context of COVID-19 pandemic. Ms. Spataru emphasized, as well, the challenges and opportunities of data production and use, as well as the importance of cooperation and coordination between the national and international stakeholders in the the field of data production.

The IOM expert, Mr. Michel Poulain, presented the context of the assessment exercise, looked at strength and weaknesses of the Moldovan migration data collection system and presented the main recommendation on the way forward mentioning a clear need for more coordination and cooperation between partner institutions and the need to undertake concrete steps for improving the migration indicators under the frameworks of the Global Compact for Safe, Orderly, Regular Migration, and the Sustainable Development Goals.

Ms. Nigina Abaszada, UNFPA Resident Representative, praised the results of the GMDAC migration data report and mentioned that the topic is close to the UNFPA mandate as it responds to demographic challenges faced by Moldova. UNFPA representative underpinned that accurate migration data is key for the demographic resilience of the country. Ms. Abaszada reiterated the importance to improve the migration statistics which will enable the stakeholders to have a clearer picture on population dynamics.
Wrapping up the session, Mr. Lars Johan Lönnback mentioned that the rich discussions during the session highlighted a series of important issues to be further developed and improved, such as the issue of systems interoperability and innovation that should lead to better data integration, use of Bigdata to map the diaspora, and foster its impact on development.